The first extrasolar planet orbiting a Sun-like star was discovered less than 30 years ago. Since then, we have found nearly 5000 exoplanets, vastly increasing our knowledge of how planets form. Although we've developed many methods to search for exoplanets, two have proven to be far more fruitful than the rest. The first is the transit method, which uses periodic changes in a star's brightness to infer that a planet has crossed its face. The second is the radial velocity (RV) method, which is sensitive to a star's periodic back-and-forth rocking caused by a planet's orbit. Transit observations led to the discovery of thousands of close-in small planets, most of which are closer to their star than Mercury is to the Sun! On the other hand, RVs have detected hundreds of planets similar to Jupiter: large and far away from their star. Unfortunately, the stars we looked at to find close-in small planets and those where we searched for distant giants have very little overlap, so we don't know whether these two types are found in similar environments. 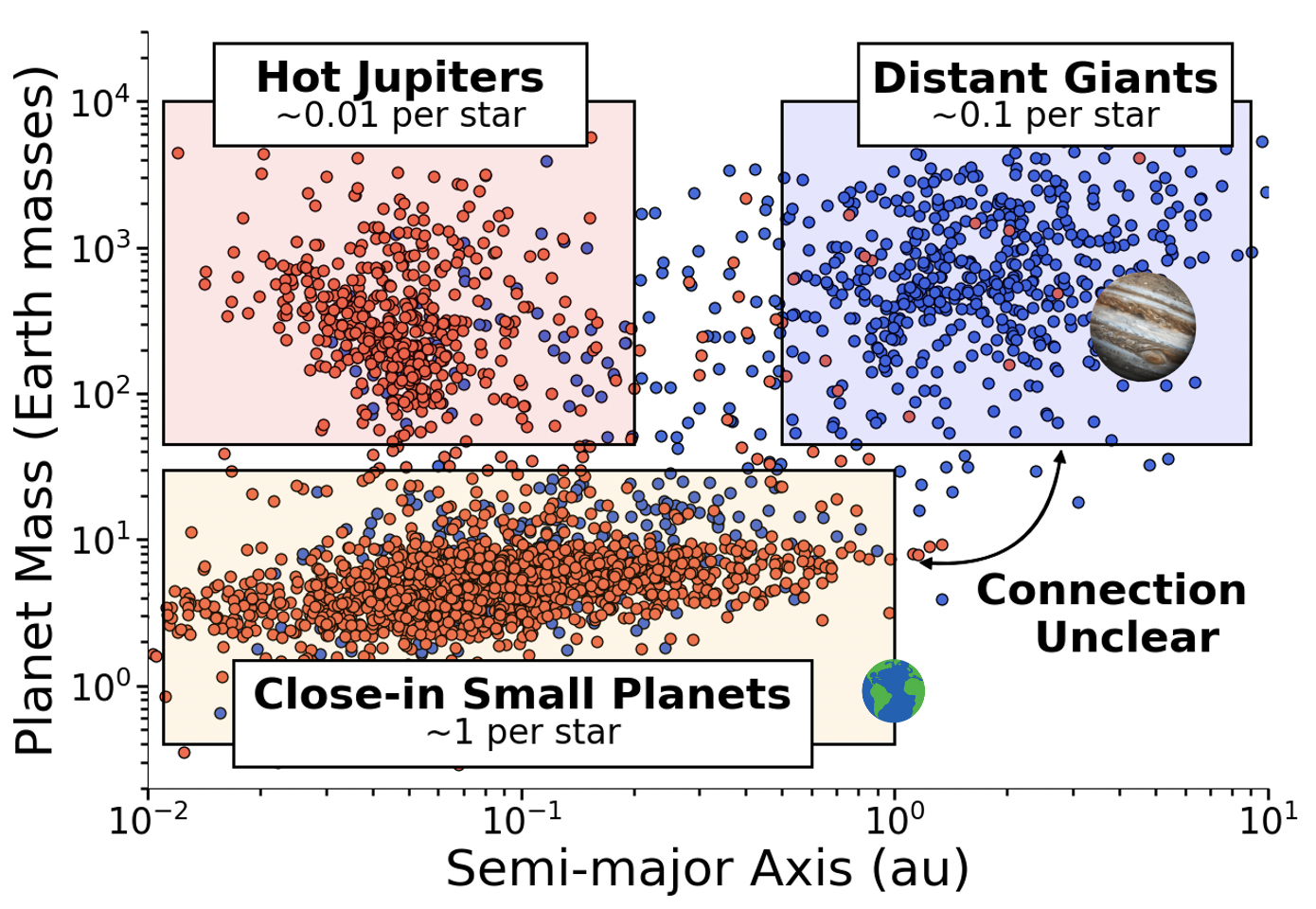 Exoplanet observations have identified three broad classes of planet. "Hot Jupiters" are actually pretty rare, but we've found lots of them because they're easy to detect. Close-in sub-giants are mostly between the size of Earth and Neptune, and extremely common. Finally, distant giants are analogs to Jupiter (similar size and distance) and are found in ~10% of systems. Red dots are planets discovered by the transit method, while blue were discovered using the RV technique. Can you see which planets each method is best for?

One of the solar system's most striking features is the division of the eight planets (sorry Pluto) into two distinct groups. The planets above are not to scale in terms of size. However, their plotted spacings do reflect the (logarithm of the) true orbital separations, meaning that there really is a large gap between the inner small planets and the outer giants. Distant Giants will help us understand whether this sort of pattern is prevalent around other stars.

For all the exoplanets we've found in the last 30 years, we know remarkably little about how they form. Astronomers use data from observations to produce planet formation models. These models describe the fundamental processes that create the systems we see. At the moment, some models disagree about whether small close-in planets and distant giants should form in similar or in opposite circumstances — whether they should be correlated or anti-correlated. We know that both types formed in our own solar system*: Mercury, Venus, Earth, and Mars are small, rocky, and close to the Sun; Jupiter, Saturn, Uranus, and Neptune are large and much farther out. This could be evidence of a positive correlation, but it also might be a coincidence. To understand whether the solar system's structure is common in other systems, I am conducting the Distant Giants survey. Distant Giants will determine P(DG|CS), the conditional probability of finding a distant giant (DG) in a system already known to host a close-in small one (CS).
*The terrestrial planets in the solar system are not quite analogous to the typical Kepler planet; they are too small and too far from their star (that is, the Sun). Still, the solar system's dichotomized planet population contextualizes the survey in a familiar way.

There are 47 stars in the Distant Giants sample, most of which were first observed in late 2020. All of them have known close-in small planets (discovered through transit observations), and we plan to observe each of them once per month (using the RV technique) for three years to search for distant giants. As of March 2022, we've found evidence for giant companions in about 12 systems, or ~25%. Like we saw above, the underlying occurrence of distant giants (i.e., regardless of a close-in small planet) is only ~10%; this early finding therefore points to a positive correlation, where the conditions that facilitate the formation of distant giant planets are also those that favor close-in small planets. This is only a preliminary result, and there's a lot of work to be done before we can officially calculate P(DG|CS). Regardless of the outcome, Distant Giants will give us a clearer picture of how planets form around Sun-like stars. 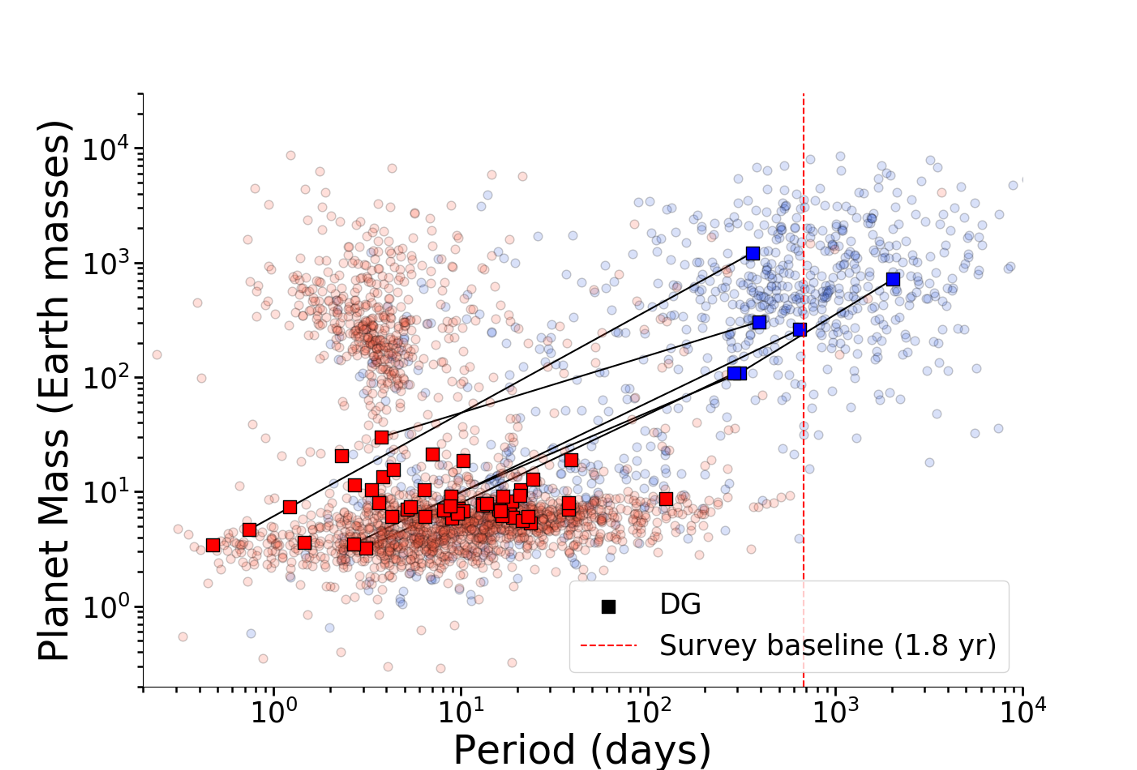 This plot is like the one at the top of the page, but with the Distant Giants sample spotlighted. Red squares show the mass and period of the transiting planet around each of the 47 stars in the survey. The distant giant planets we've found are shown as blue squares and connected to their transiting companion. The vertical red line indicates the current survey duration. For distant giants to the left of this line, we have observed at least a complete orbit. The one giant to the right of the line was characterized based on a partial orbit, and therefore has more uncertain parameters.

Here's a more in-depth presentation on the Distant Giants survey from the Keck Science Meeting on September 10, 2021. My talk outlines the survey and describes the trend/astrometry analysis (soon to be) detailed below.